The Spanish PLUPERFECT TENSE What does this tense mean? How do I use haber for this tense? AIMS: To learn how to recognise regular and irregular pluperfect.

Presentación del tema: "The Spanish PLUPERFECT TENSE What does this tense mean? How do I use haber for this tense? AIMS: To learn how to recognise regular and irregular pluperfect."— Transcripción de la presentación:

2 REMINDER: SPANISH PERFECT TENSE Haber + (space) + Stem* + Ending *Stem = The infinitive (the one you find when you look in a dictionary) minus the last 2 letters.. He cantado = I have sung He comido = I have eaten He vivido = I have lived -AR -ER -IR -ado-ido ENGLISHSPANISH I have He You have Has He/She has Ha We have Hemos You have Habéis They have Han

3 In Spanish, you use the pluperfect tense when referring to actions that had happened in the past. EXAMPLES I had washed the car. I had done the washing. I had laid the table. I had prepared the dinner. I had earned my pocket money.

4 So, how is the pluperfect tense formed in Spanish?

6 Step 2: Create the past participle (the –ed form of the verb in English), by adding the appropriate ending to the stem. The great thing is that to talk about other people, it is only the form of haber that changes. Haber -AR-ER-IR Había Stem + ADO Stem + IDO Habías Había Habíamos Habíais Habían

8 3 of the most common: Decir (to say) > dicho Hacer (to do) > hecho Ver (to see/watch) > visto And some other really important ones: Abrir (to open) > abierto Absolver (to absolve) > absuelto Cubrir (to cover) > cubierto Escribir (to write) > escrito Freír (to fry) > frito Morir (to die) > muerto Poner (to put) > puesto Romper (to break) > roto Satisfacer (to satisfy) > satisfecho Volver (to return) > vuelto

9 Now translate the following verbs. Remember to choose the correct form of haber and then conjugate the verb in the steps you have already used. Beware of irregular verbs because there are lots of them here! 1.He had done 2.They had drunk 3.We had worked 4.You (p) had watched 5.I had lived 6.They had broken 7.He had died 8.She had seen 9.I had played 10.I had returned 11.We had said 12.He had visited 1.Había hecho deberes 2.Habían bebido 3.Habíamos trabajado 4.Habíais visto 5.Había vivido 6.Habían roto 7.Había muerto 8.Había visto 9.Había jugado 10.Había vuelto 11.Habíamos dicho 12.Había visitado

Descargar ppt "The Spanish PLUPERFECT TENSE What does this tense mean? How do I use haber for this tense? AIMS: To learn how to recognise regular and irregular pluperfect." 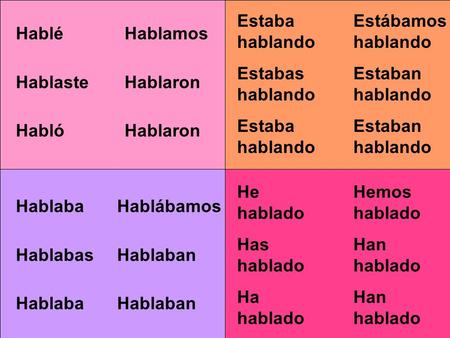 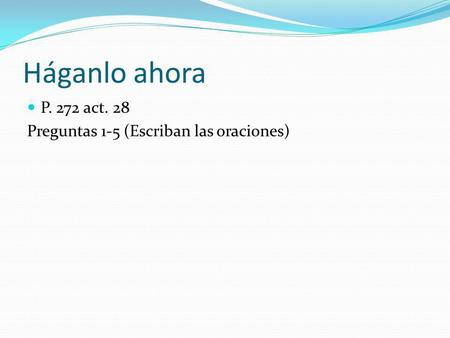 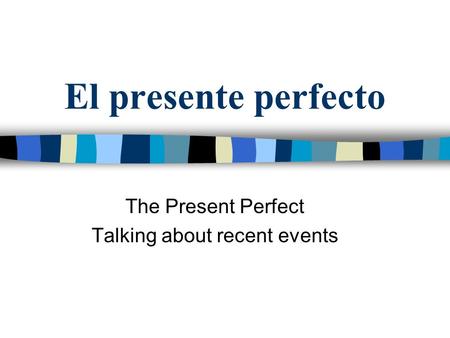 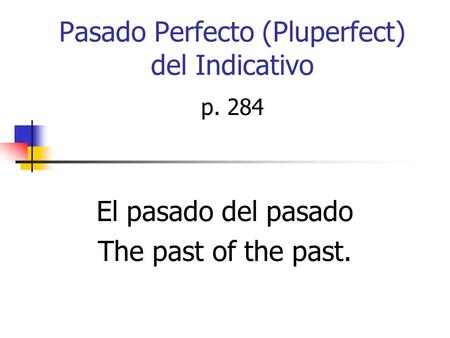 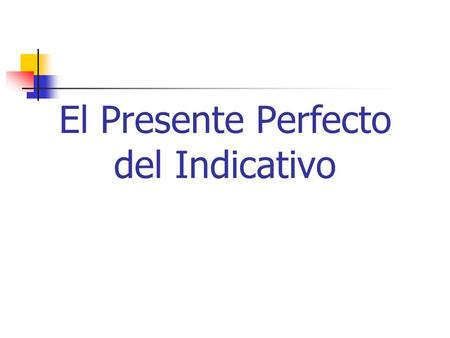 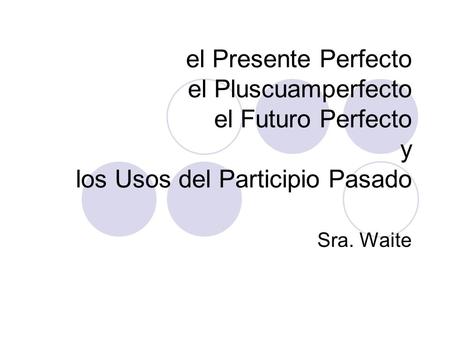 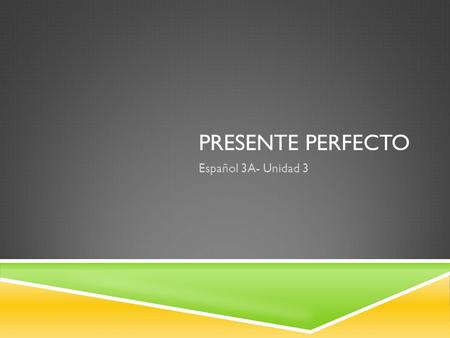 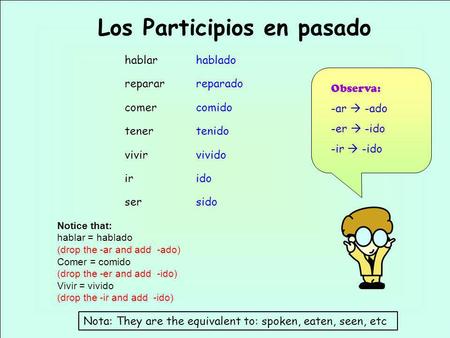 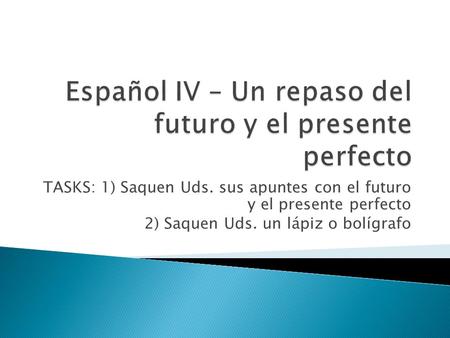 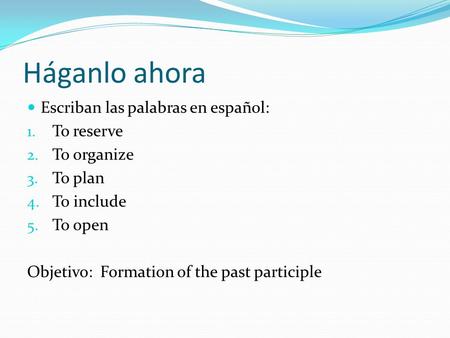 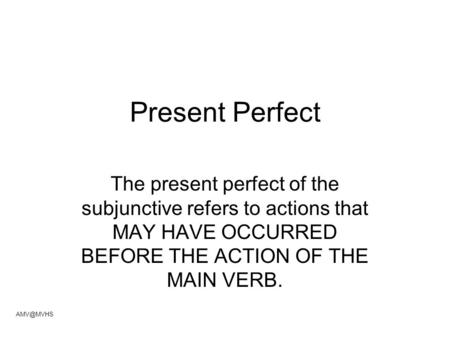 Present Perfect The present perfect of the subjunctive refers to actions that MAY HAVE OCCURRED BEFORE THE ACTION OF THE MAIN VERB. 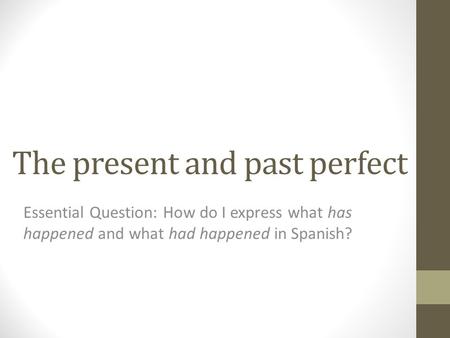 The present and past perfect 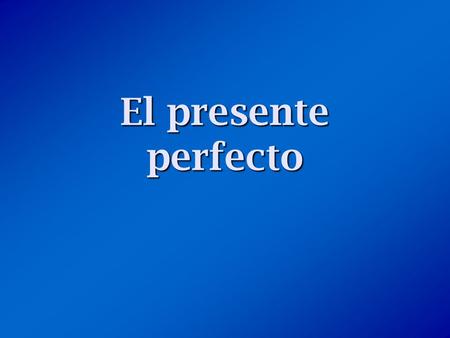 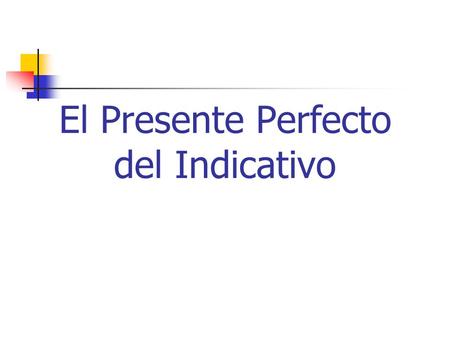 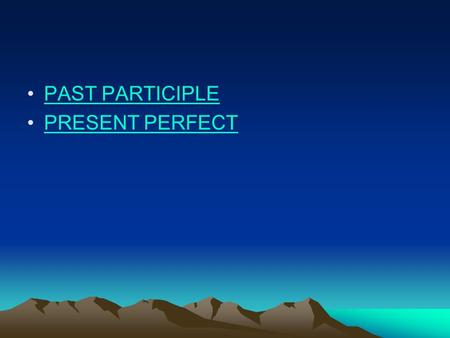 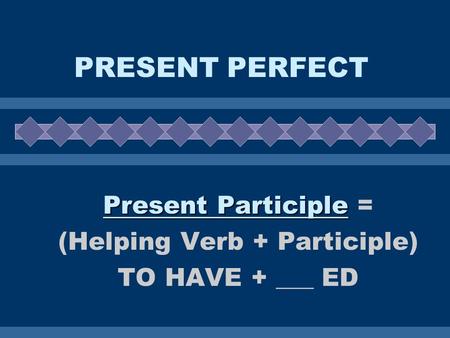 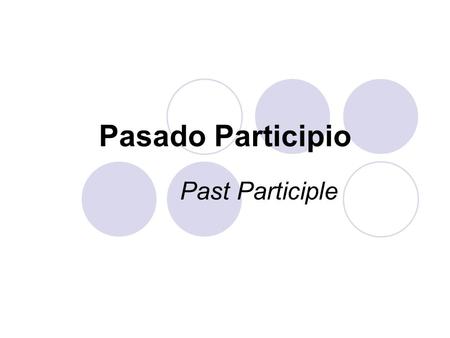 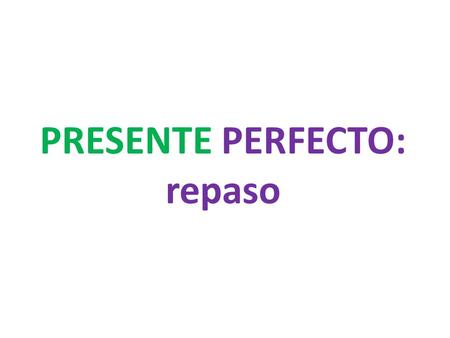 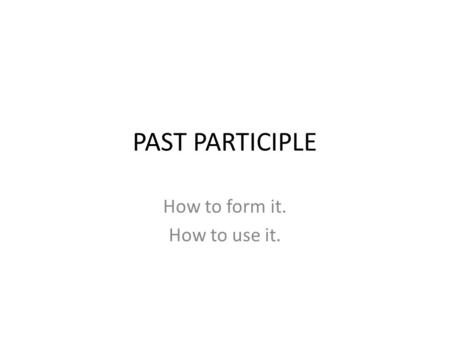 How to form it. How to use it. 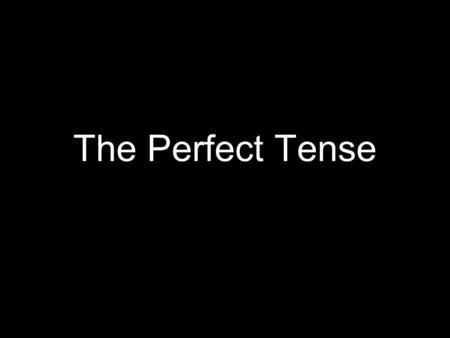 The Perfect Tense. How do you form the perfect? The perfect tense is formed by using the correct form of the helping verb (haber) together with the past.